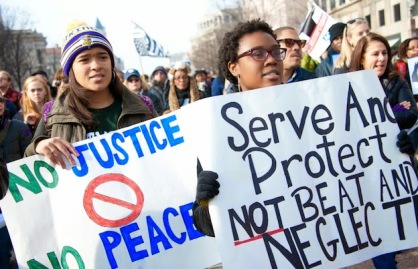 Everything that is happening in this country and around the world is happening in 2015. Not 1965, not 1865. It is happening right now. Yes, the same acts of terrorism (via white supremacy) that has been happening to black people, LGBT people, poor people, women, and especially those whose oppressions intersect with one another. But across oppressions, if you throw being black in the mix, then you are truly fucked.

All of these injustice are happening in 2015. Dismissing the Charleston Massacre and the new wave of black church burnings with statements like, “Damn. What is this 1865?” or telling a black person that their problems aren’t real because “it’s not 1950 anymore!” will not stop the onslaught of terror the black community continues to face. The year is two thousand and fifteen and the police and people are killing blacks now. The year is 2015 and vigilantes are getting away with the murders of black folk or at the very least receiving less harsh sentences. This year is in fact 2015. You are correct. And nothing is changing when it comes to the demise of black people in America. This country wants us to either continue to be their slaves or simply die. In 2015. Was that too dramatic? Did that last sentence not have enough factual evidence to back that up? How about you get your degree in Africana or African-American studies then since you want to become a scholar on the subject.

There is nothing a black person can do to be safe in this country if extremists are burning down places of worship! Churches across the globe are considered sanctuaries. Several uprisings throughout world history have happened and people would flee to churches for safety because it was a heinous act to attack God’s house. But the white American extremist knows no bounds to their ruthless hatred of the black person. Spirituality in the black community is what keeps us sane enough to walk through this cold world; a world that doesn’t love us. The church is the bedrock in countless black communities. When students need money for college black churches create grants for their congregation. These are some of the same students who would be ineligible for many federal grants due to technicalities or a lack of knowledge on grant research altogether. Black churches give meals to their loved ones because some would otherwise go hungry – and it’s just great food shared between great people. Churches are for the blacks who are traumatized with their lives and could only seek solace and advice from their pastor. Look at the amount of black people without health insurance and need to work, you think they have time for or can afford a psychiatrist? The Civil Rights Movement was born in southern churches. Black music that everybody just loves so much, has its roots in the Black Church.

To burn churches and shoot the Saved in their very places of worship is terrorism at its finest and it is sick. This is happening right now and it will happen until 2165 if we do not become real about the situation and take action. Millenials are so out of whack that it is irritating. The melting pot ain’t real! We are not all equal, I thought we were but the silence while these events occur is deafening. I know I have every right as the wealthy heterosexual white American-born male, but according to this country’s behavior I am subhuman. Imagine, just imagine, if the New Black Panther Party was going around Vermont, New York, and Connecticut setting Protestant churches ablaze and shooting up WASPs? Six of whom were old white women? You cannot sit here and tell me that blacks have the same equal access to justice that white people do because according to history and present-day 2015, we do not.

I know what year it is. And reminding me that it is not 1965 is exactly the point. It isn’t 1965. So why do these problems persist? Because deniers halt progress. They are the people who refuse to see what is in front of them. The ones who remain silent and when asked blatantly, tell us to forgive and forget. The ones who truly believe that time alone heals all wounds. The ones who believe that if they close their eyes really tight underneath their covers, that the boogeyman won’t come for them. They are the ones who keep the anti-black racist media in business because they believe their every word, right down to the syllable. They are supremely content with their miseducation.

I sat down one day and I thought of that. As a millennial, there was a time when I believed that it was all over and we were all equal at last. The police always suck, but they’re mean to everyone. Whenever a black person died, we got livid – and they got off. But black people die from time to time, but that’s not too common. Boyz N The Hood and Do The Right Thing was like, centuries ago. That’s not a statement of the times today. If they see me, they would never hurt me because I know how to act. But then I saw the onslaught of innocent black people being killed. And oh, the aching variety. Some were elders, middle-aged, young, gay, trans, toddlers, boys, girls, men, women, handicapped, immigrants, poor, middle-class… they are coming for all of us. And the country chose denial over our lives.

It is 2015. You are just as guilty as the murderer if you are a denier because although you did not kill a person, you killed their character. You tainted an innocent victim’s legacy. And you shamed the people who were brave enough to mourn them. It is 2015 and this country has to own up to its sick history with its black and indigenous people so that we can in fact stop repeating history. Stop condoning black murder and disenfranchisement and stand up. Be the hero you think you are because nobody is coming to save us.